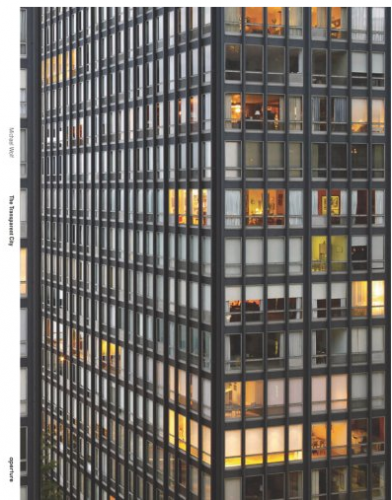 Chicago, like many urban centers throughout the world, has recently undergone a surge in new construction, grafting a new layer of architectural experimentation onto those of past eras. In early 2007, the Museum of Contemporary Photography, with the support of U.S. Equities Realty, invited Michael Wolf as an artist-in-residence to document this phenomenon. Bringing his unique perspective on changing urban environments to a city renowned for its architectural legacy, Wolf chose to photograph the central downtown area, focusing specifically on issues of voyeurism and the contemporary urban landscape in flux.

This is Wolf's first body of work to address an American city. Whereas prior series have juxtaposed humanizing details within the surrounding geometry of the urban landscape, in The Transparent City, his details are fragments of life--digitally distorted and hyper-enlarged--snatched surreptitiously via telephoto lenses: Edward Hopper meets Blade Runner. The material resonates with all the formalism of the constructed, architectonic work for which Wolf is well-known, but also emphasizes the conceptual underpinnings of his ongoing engagement with the idea of how modern life unfolds within the framework of the ever-growing contemporary city.