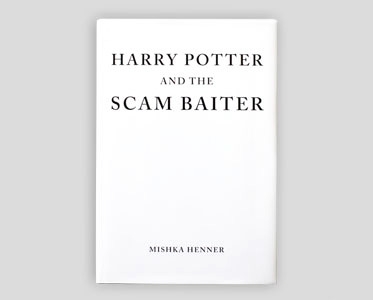 A novel within a novel, Harry Potter and the Scam Baiterpresents one of the most notorious scam baits in the brief history of web culture; the cross-continental encounter between Barrister Musa Issah, Mrs. Joyce Ozioma, and Arthur Dent.

From the Epilogue:
"Scam baiting is a form of Internet vigilantism in which the vigilante poses as a potential victim to a scammer in order to waste their time and resources, gather information that will be of use to authorities, and publicly expose the scammer. It is, in essence, a form of social engineering that may have an altruistic motive or may be motivated by malice. Primarily used to thwart advance-fee fraud scams, scam baiting can be conducted out of a sense of civic duty, as a form of amusement, or both.